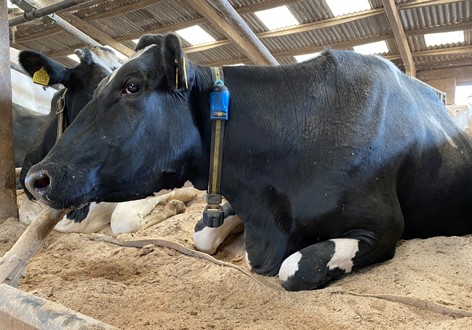 The installation of a cow monitoring system which watches over their entire dairy herd has enabled the Herridges of Bent Farm near Tissington to maximise their herd’s fertility scores and has paid for itself by providing an early warning of potential health issues.

Mike and Amy Herridge farm with their eldest daughter, Natalie, at Bent Farm near Tissington where they milk 350 cows and manage 260 youngstock. With a focus on breeding cows with good fertility, high milk solids and good dairy strength and longevity, and feeding a TMR ration, their herd is able to achieve 11,000 litres per lactation, with the latest monitoring technology also keeping an eye on fertility and rumen function 24 hours a day.

The herd is housed all year, with stale cows put to pasture in the spring to make additional room in the cubicle sheds for fresh calvers. All the herd’s AI is done in-house by Amy and Natalie, using sexed dairy and conventional beef semen. “Notionally we aim to breed half the herd to sexed semen and the rest to beef bulls,” Natalie explains, “but we typically end up using sexed semen on more cows than we should because I find it hard to put good quality cows to average beef bulls.”

Dairy sires are selected for milk solids, feet and legs, fertility, longevity and dairy strength: “We’re not aiming to breed anything too extreme or showy,” Natalie adds, “instead preferring to produce replacement heifers which will develop into profitable, easy to manage cows.”

To improve the herd’s fertility, the Herridges first introduced an Allflex heat detection system in 2016. “We didn’t have a specific fertility problem we needed to address,” Mike explains, “but wanted to improve heat detection in our maiden heifers to optimise insemination timings. The Allflex system proved to be a very useful tool so, a few years later, we upgraded to the next generation SenseHub system which monitors health as well as heat.”

Each of the herd’s 350 cows are now fitted with their own individual SenseHub collar which monitors activity and rumination patterns, with the remaining 50 units used to detect heats in maiden heifers: the collars go on at 13 months of age, then, once confirmed in-calf, the collar is removed and transferred to the next animal.

Mike, Amy and Natalie all have the SenseHub app loaded on their phones, as does their principal farm worker who is in charge of managing the farm every other weekend. “He doesn’t use the app as proactively as we do as he isn’t doing any AI work,” Mike continues, “but it’s a useful tool for him to have at his disposal as it automatically makes him aware of any potential problems such as changes in rumination, changes in eating behaviour, heat stress or general ill health. It also allows us to keep an eye on the herd remotely which means we can sleep at night without having to worry that something fundamental has been missed when we’re not there.”

Natalie explains that the system came into its own during a recent spell of hot weather: “For several days the temperature exceeded 30oC,” she describes, “which meant there was a danger that the onset of heat stress would cause some fertility issues. I therefore used the SenseHub app to assess each bulling cow on an individual basis, which allowed me to make an informed decision to use beef semen on those cows which were struggling with the heat. We’ll have a few less dairy heifer calves next year as a result, but we haven’t wasted any sexed semen on those cows which were less likely to conceive during the heatwave.”

“We also use the SenseHub app to highlight any of the symptoms associated with mastitis or e.coli infections such as a suppressed appetite or reduced activity,” Mike adds. “We can now spot problems 12 or more hours sooner than clear clinical symptoms might appear, which means we can get cows back to full health sooner and reduce the potential for lost milk.”

“Once a cow has gone down with mastitis we’ve usually only got a 30% chance of getting her back to her full productivity during that lactation. With SenseHub giving us the heads-up that bit earlier, those odds increase to more than an 80% and there’s less chance we’ll need to get the vet involved.”

Mike goes on to describe a situation last year when a problem with the farm’s maize silage threatened the performance of more than 30 cows: “It all came to a head one Saturday afternoon when, within the space of a couple of hours, the SenseHub app sent health alerts for more than 30 cows which were showing a reduced feed intake, below average rumination and low activity.

“It turned out that the problem was related to a mycotoxin issue caused by mould on the face of the maize clamp. Fortunately, because SenseHub picked up on the problem as soon as feed intakes started to fall off, we were able to administer a binding agent before things got too serious. We avoided any significant impact in terms of milk yield losses and were able to get the affected cows back to full health without any long-term issues.

“The app saved us a lot of problems on that occasion and is now an essential element of our herd health and fertility management routine. We weren’t bad at getting cows heifers in calf before we started using SenseHub, but we’re now timing first services more effectively. As a result, we’ve been able to extend the herd’s voluntary waiting period from 42 to 52 days without it impacting on our calving interval which can only be of benefit to cow longevity.”