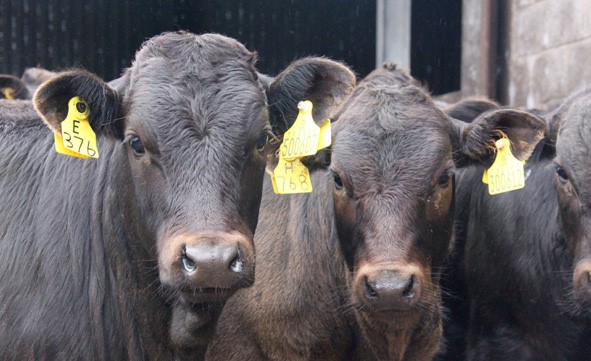 For Phillip Jones and family of Lan Farm, Carmarthenshire, introducing a three-stage BVD eradication plan has enabled his beef herd to recover from a disease outbreak which impaired herd performance and threatened to decimate his farm business.

For Phillip Jones and family of Lan Farm, Carmarthenshire, introducing a three-stage BVD eradication plan has enabled his beef herd to recover from a disease outbreak which impaired herd performance and threatened to decimate his farm business.

Phillip Jones runs a spring calving, organic suckler herd of 110 Limousin-cross cows, plus followers at Lan Farm in Carmarthenshire, South Wales. His ambition to increase the herd to 140-150 cows has been hampered by a BVD outbreak, which not only caused a decline in cow numbers and impaired the herd’s productivity, but also put significant financial strain on the farm business.

Ten years ago, Phillip was running 120 cows as a flying herd. However, persistent health issues, including a particularly bad outbreak of pneumonia, were having a detrimental effect on the herd’s fertility and growth rates.

“As well as the obvious signs associated with pneumonia, we were also seeing symptoms such as dull and lifeless new born calves which wouldn’t suckle with any vigour,” Phillip describes. “Fertility rates and daily live weight gains had dropped off and we were struggling to maintain a viable business.

“At first we didn’t know what was causing the herd to be so out of sorts and put it down to ‘one of those things’ that happens in livestock farming. In hindsight, we’d had an underlying problem for several years. When we started to see more and more empty cows at scanning, we knew we had to find out once and for all what was causing the herd’s poor performance.”

In the winter of 2009-10 Phillip asked his vet, Helen Scott from Carmarthen Veterinary Centre, to investigate further by taking blood samples from the entire herd, including the breeding bulls to see if she could diagnose what was causing the problems. “It was an expensive exercise,” Phillip explains, “but the blood tests confirmed that a large proportion of our breeding and youngstock were infected with BVD (Bovine Viral Diarrhoea).”

With the cause of the herd’s problems established, a simple, but effective plan to eradicate the disease and to protect against future infections was put in place.

“We removed any BVD positive animals from the herd and quarantined any PI (Persistently Infected) animals prior to their disposal,” Phillip explains. “We then initiated the first two parts of a three point disease eradication and prevention plan by vaccinating the entire breeding stock and converting from a flying herd to a closed herd.

“As a flying herd, we were not only facing the risk of bringing diseased cattle onto the farm, but were also in danger of exporting disease to other herds. We therefore felt a moral responsibility to protect ourselves and others.”

Closing the herd immediately prevented Phillip from being able to re-build cow numbers. “We had stopped buying replacements but were still culling as normal and were down to just 90 cows,” he explains. “At the time, we were calving fresh heifers at three years, so it took four years before we started to see numbers increase. It was financially crippling for us as we had less stock to sell each year but still had to cover our bills and mortgage.”

Each animal at Lan Farm is vaccinated against BVD and tissue sampled at birth to ensure the herd remains BVD free.  Electronic Identification (EiD) tags are also used to simplify herd management and record keeping.

Even now, with 110 breeding cows, the herd still isn’t back to its 2009 size, although it was officially accredited as being BVD free in 2013. “From a positive point of view, that’s a fairly quick turnaround,” Phillip continues. “The herd’s overall health has improved hugely and our sucklers are performing much better than they used to. We’ve also managed to tighten our calving period from more than eight months down to just three months thanks to an improved calving interval which has gone from 404 days to 371 days.

“We’re also calving our heifers at two years instead of three thanks to faster growth rates. That’s our best indicator of herd performance. It also means cow numbers are rising at a faster rate and we’re finally back on track to expand the herd to 140-plus cows.” Despite the herd being BVD free, Phillip remains cautious and has introduced a third step to his BVD eradication scheme: “When we first vaccinated against BVD, the use of tissue sampling ear tags (TSTs) was relatively new, but we immediately saw how they could benefit our business. We now use Allflex TST tags on every animal at birth to ensure they are BVD free.

“I know we probably don’t need to be quite so cautious, but for a nominal cost per animal, the TST tags give me extra peace of mind by knowing that each and every animal on the farm is clear of the disease. “It’s difficult to change a winning combination and I’m simply not willing to risk taking another backward step, especially as we now have faster growth rates throughout the whole system,” Phillip adds. “In fact, our system is performing so well that we’re now selling 95% of stock to repeat buyers, some of whom are willing to make deals over the phone without seeing the animals. That speaks volumes about the quality and consistency of the animals we’re producing and, in my mind, justifies our ongoing vaccination and tissue testing regime.”