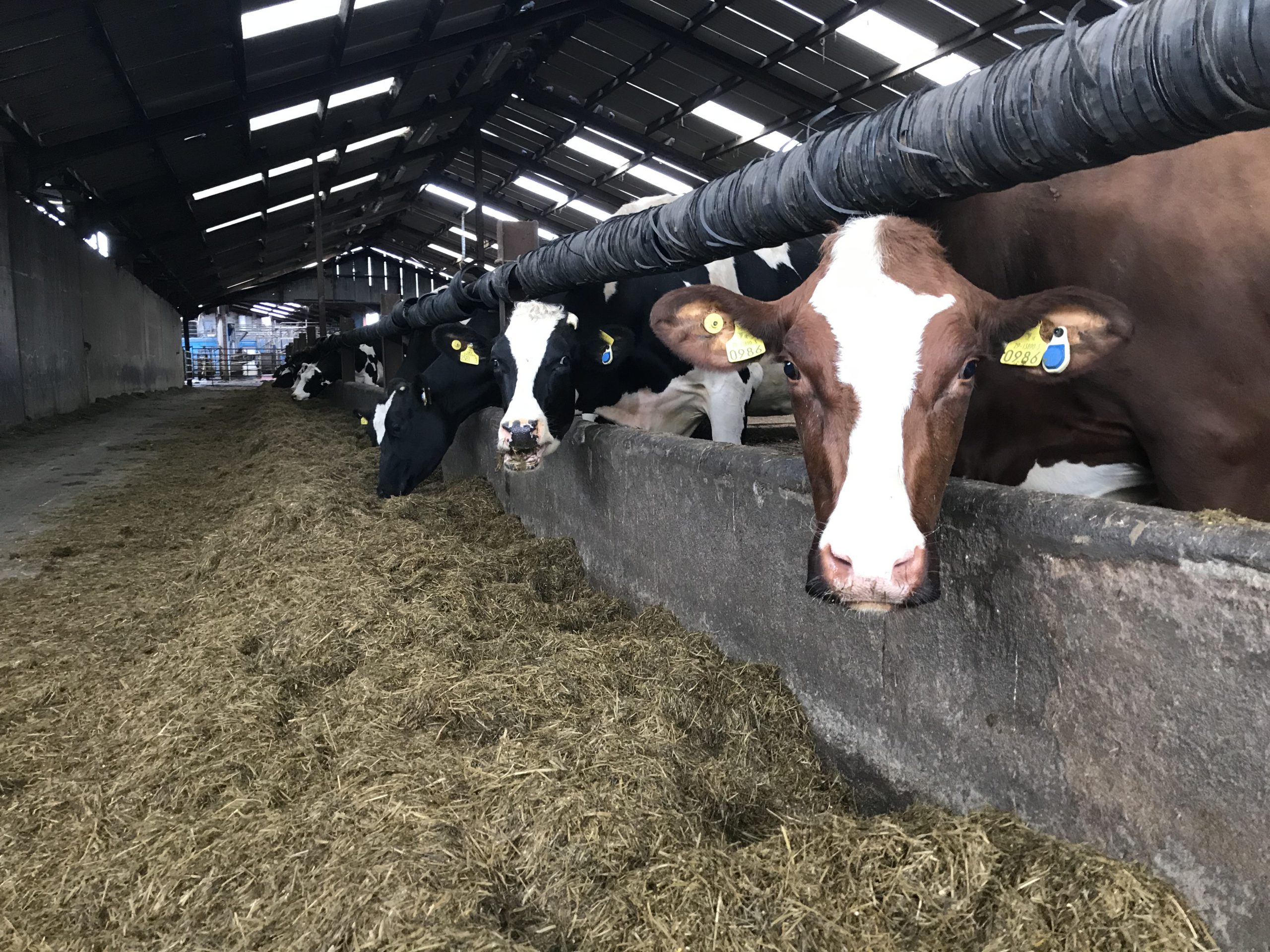 After their dairy herd was wiped out by TB in 2013, the Garvey brothers from Silverbridge in County Down have successfully rebuilt their Millfarm herd of pedigree Holsteins. And, despite the disease still impeding the running of the farm, their focus on cow fertility and health means the herd is performing well.

Prior to 2013 the Millfarm herd numbered 150 milking cows and 30 in-calf heifers. Unfortunately, a severe TB outbreak resulted in the entire herd being culled, with the farm remaining void of livestock for six months.

Since then, Raymond, Paudie and Aidan Garvey have rebuilt the herd with 80 cows purchased from County Armagh and another 30 from County Louth. Additional high genomic cows have been imported from England, and it is these which will form the foundation of the herd’s breeding programme going forwards.

“Having invested in a really strong base of genetics, our focus is to do everything in our power to ensure the new herd remains as healthy, fertile and productive as possible,” Aidan Garvey explains. “That means producing enough high-quality replacement heifers to allow us to continue producing a viable volume of milk despite continuing cow losses to TB.

“To that end we’re AI-ing the cows with the most appropriate bulls to enhance the herd’s genetic potential and have started using sexed semen on our maiden heifers to maximise the number of replacements coming through.

“We’re also using embryo transfers to give the herd’s genetic merit an extra boost. However, for this to work efficiently and cost-effectively it’s essential that we have a clear and accurate picture of each cow’s reproductive cycle.”

The Garveys have historically used a collar-based heat detection system to improve conception rates, but nine years after the collars were originally purchased, their accuracy started to diminish as a result of their internal batteries becoming depleted. The collars were therefore replaced in November 2017 with an ear-tag based system which, as well as monitoring activity levels to detect heats, also observes rumination patterns to detect developing health issues.

“We’ve moved away from a collar-based system in favour of intelligent ear tags simply because the collars needed a lot of maintenance,” Aidan describes. “We didn’t have enough collars for each cow to have her own permanently fitted which meant we were putting cows through the crush daily so that the collars could be swapped from PD+ cows to those next due in heat. That meant a lot of extra work each day, and with the added pressures of trying to manage the constant threat of TB, we needed to find a simpler way of working.”

Each cow is now permanently fitted with her own unique intelligent ear mounted sensor which measures activity and rumination patterns on a 24/7/365 basis.

“By monitoring rumination and activity, the Allflex SenseHub ear tags provide a much clearer picture of each animal’s health and fertility,” Aidan continues. “And because they’re as easy to fit as a regular cattle tracing tag, we’ve eliminated the daily task of having to adjust or swap collars.”

As well as using the main farm computer to view the SenseHub data, all three of the brothers also have the Allflex SenseHub app loaded onto their smartphones so that they can see, at a glance, which cows need attention, be that to treat a potential health problem or for insemination: the app is linked to the SenseHub server and allows users to access the herd’s records from anywhere with internet access. The app also sends automatic notifications to warn of potential health issues, heat events, suspected abortions and irregular heat cycles.

“We’ve got a much closer understanding of each cow’s fertility and health status,” Aidan adds. “As a result, we’re purchasing less semen than we were this time last year and we’re calving 15% more cows each month, simply because we’re spotting heats more accurately and getting better conception rates by inseminating at the best possible time. That has given us the confidence to use better quality, more expensive semen and to increase the amount of sexed semen we’re using.”

As a result of these changes, and despite the fact the herd is still constrained by TB, the Garveys are producing enough milk to keep the business viable.

“To maintain milk production, we’ve pushed a lot of cows to give an extended lactation,” Aidan continues. “That’s less than ideal in terms of the knock-on effect it could have on reproductive cycles, but so far the SenseHub system has helped us to manage the situation by enabling us to spot even the subtlest of heats and to get cows back into calf as soon as possible.”

In addition to improving the herd’s breeding efficiency, the ear tags also enable the Garveys to spot underlying health issues, often before the cows show any physical symptoms. “By monitoring rumination patterns, the SenseHub system highlights potential problems such as lameness, respiratory issues, low cudding or fever. And because it makes us aware of these problems before any physical symptoms are showing we can intervene earlier to keep the cows in peak condition.

“The system is so sensitive to changes in how and when each cow ruminates, that we can also use the data to see whether the herd is utilising its ration to full effect and, if not, rectify any dietary problems before they have an adverse impact on feed conversion or milk production.”

It’s the ability to monitor these subtle signals that Aidan believes are helping the herd to succeed: “Although we’re still down on cow numbers due to our ongoing battle with TB, we’ve become much more efficient at producing replacements,” he explains. “We’re serving more cows, targeting heats more accurately and have reduced our breeding costs by improving conception rates. And because of these improvements, we’re still producing plenty of milk in spite of TB.”